Ches Smith with These Arches and Shahzad Ismaily at The Stone 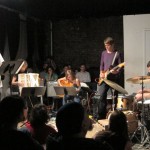 "These Arches" at The Stone 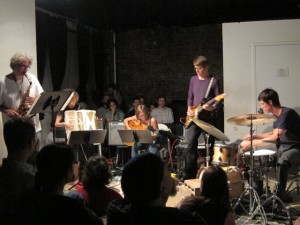 "These Arches" at The Stone

Remarkable evening - both sets were jam-packed full with a very different audience for each show. Before the doors opened I got to talking to a young drummer from Mexico City (see photo), Gibren, who is here studying with John Hollenbeck, Tim Berne, Mark Helias, and Jim Black - smart guy to being doing that. I will watch to hear his music and progress. All pieces during the first set were composed by Ches with improvisation included. What I noticed was that there were no solos, except one late in the set by Ches, and I recall one duo time with Mary and Tim. The musicians played together in a way where each brought their fabulous creativity and talent and each was an addition to the whole. I could hear them individually but none of them grabbed the spotlight, no showboating, but they are all such pros that they donʼt need to do that. There was one moment where they all played wonderfully in unison but soon branched out. The pieces, not named from the stage were No Limitations, Black and White, Julius, Hammered (one of my favs), One Long Minute, This Might be a Fade Out, and Anxiety Disorder.

Now this was different than anything I have seen or heard before.

Shahzad announced at the beginning that the set would be 38-42 minutes long and would revolve around 5 situations: Song, Story, Poem, Fragment, and Meme (I think. It could have been Theme). He requested that the audience member call out which they which they like to hear and he would improvise from there. He also said that all the gear on stage, all of it except the Teddy Bear, were for sale after the performance. The first call-out was Story. Shahzad played the guitar and sang a lovely song. As the evening continued he responded to each request playing a different instrument each time. I was struck by how well he played each, for instance, playing the banjo with a bow. This could have sounded awful, but didnʼt. It was haunting and soulful. The electronics were varied and pertinent to each piece and his drumming rocked out, especially the during the encore. 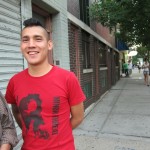 “These Arches” at The Stone 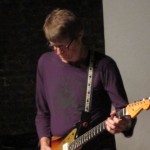 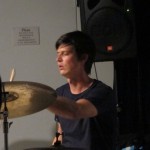 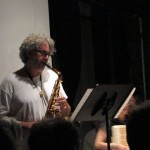 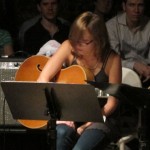 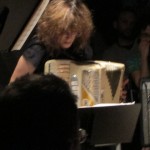 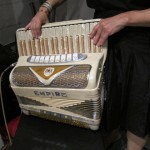 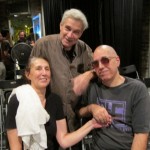 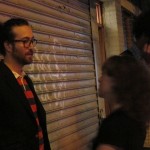 Sean Lennon and Andrea after the gig 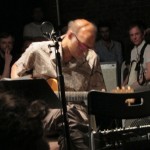 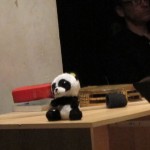