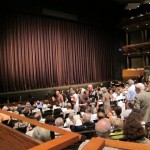 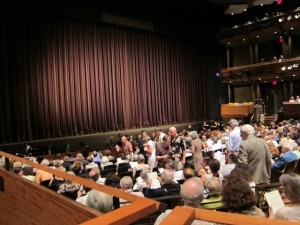 This performance received a huge review with large photos in the NYTimes today and I purposely did not read it until after I saw the performance. I have seen his performances a few times before and sometimes I have loved them and sometimes I thought them silly. However more good than silly: “L’Allegro, il Penseroso ed il Moderato” was breathtaking and is thought of by the experts as genius. In my view, this night contained both - silly and genius. The silly one was “Renard” to Stravinsky’s music of the same name. Dancers dressed to represent barnyard animals, their species noted on tee-shirts front and back:

The hens in the coop were represented by 3 females dressed in 1950s cheer-leader type outfits, acting like dumb chicks. Ugh. The story was about the animals going after one another in predictable ways: fox in the henhouse sorta thing. I didn’t think the choreography or story was up to the music. Second number was “Festival Dance.” Music was “Piano Trio in E major, Op. 31” (1819) by Johann Hummel who I didn’t know before. I liked this. The format was mainly male/female duos, coming and going in lovely ways. The costumes were, interestingly, non-interesting. Many tones of grey. The women wore below-the-knee circle skirts which had bands of red on the underside edge. The men long pants and t-shirts. There was no set, just the background in varying shades of green and blue. That worked well. It really was lovely and as Alex Ross writes on his blog, very related to the music, but then came the third piece which I think was the genius one: “Socrates” (1917-1918) with music by Eric Satie, Piano, Colin Fowler; Vocalist, Michael Kelly. This was brilliant in all aspects. As Peter Matthews said to me (and will say in his Feast of Music blog) it seemed like “classical sculpture come to life.” The choreography was, what do I say, amazing. The movement, the groupings, the passion. The costumes were perfect. They were short tunics of airy translucent fabric which were beautifully coordinated soft, natural colors: turquoise, tan/grey, a very warm gold/sunset. Very elegant. The groupings, often 3 groups of 5 (6 women, 9 men) were color coordinated and seemed genderless. There were moments when a group would hold hands in a circle which conjured up my favorite Matisse’s painting, Dance (I). Really quite staggering. I could have watched this all night. The music matched. The singer’s voice was strong and lovely. There were English subtitles above the stage but I didn’t want to miss the dance by watching them. I will read Plato’s “Socrates” soon. Mark Morris took a bow. He was wonderful in his black t-shirt, plaid shorts, sandals with black socks. Love it. I wish I could have photos for you and for me. Not allowed.

The afternoon before Mark Morris, I went with a friend, Ruth Zachary, who I met at Mary Rowell’s Farewell Concert, to the Museum of Arts and Design (MAD). We had lunch first at the very good restaurant on the 9th floor, Robert. Very contemporary furniture with lots of lucite, bright colors and a fascinating video on one wall. I had never been to this museum on Columbus Circle before and look forward to many more visits. The exhibit we saw, which comes down 9/18, was “Otherworldly: Optical Delusions and Small Realities.” See photos. I don’t think I was supposed to take pictures but here’s a coupla’ quickies. Very impressive exhibit. Then off to the Film Center at Lincoln Center to see “Mozart’s Mistress.” It was full of grandeur - castles, costumes, and carriages. I am glad I saw it but was a bit slow going. The film was set in 1766 when Mozart was 10 and Nannerl 15 years old. About 200 years before Feminism became a public struggle. 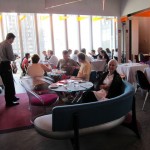 Robert restaurant at Museum of Arts and Design (MAD) 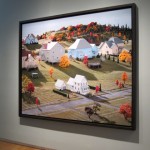 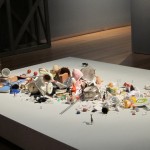