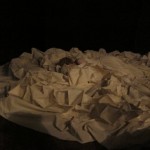 Mozart's Sister. This is her costume and the scene as we entered.

Created and performed by Sylvia Milo. Music by Nathan Davis (her husband, composer and percussionist with ICE) and Phyllis Chen. Ordinarily I wouldn’t mention the costume designer but this performance revolved around the costume which was also the set; Magdalena Dabrowska was the creator. The use of the huge skirt was interesting; the folds created pockets which contained small props like a tea cup, a powder puff, and a toy piano all of which were used effectively. This play about Nannerl Mozart was beautifully performed and written. We all know how Mozart’s sister was a victim of sex discrimination, brushed aside by her father in favor of Wolfgang. This tale was told in a manner that was charming, poignant and, may I say, fetching. I hope they find a way to produce it for a longer run.

Artist Talk with William Forsythe where he discussed his work with clips from the BAM performances from 1998 to 2009. Marina Harss, dance journalist, was the interviewer. This was very informative and not pedantic. I, who have heard about Forsythe for years but have never seen his work, may now appreciate his work from a more informed view. He was the Director of the Frankfurt Ballet for 20 years and in 2004 he started his own Forsythe Company in Berlin. Here’s his short bio: http://www.bam.org/view.aspx?pid=131

I thought this was wonderful although the NY Times reviewer in his snide review said “To enjoy him is congratulate yourself on your own smartness.” Needless to say I disagree with him. Does that make me dumber or smarter? It was fun, energetic, fascinating. There was quite a bit of text spoken mainly by the brilliant Dana Caspersen, her voice often affected electronically to portray different characters in the same speech, with accompanying bodily gestures, amazing movement/dance. Nothing that I saw was done in unison but the groupings varied; there was never a dull moment although there was a rather sad and thoughtful ending. The piece in the promos is described as “a darkly comic exploration...” The 18 dancers are incredibly virtuosic and I, for one, would love seeing it again one day.

Bad Review in the NYTimes: http://nyti.ms/thCuGc

Here’s a better review in The Guardian: http://www.guardian.co.uk/stage/2011/feb/24/the-forsythe-company-review

I love Mike and Holly. They are my long time San Diego friends; Mike and I went to Pt. Loma High School at the same time. They play beautifully in all configurations, my favorites being solo and duo. This night was special as the weather was so terrible it kept many away so we had an evening with a small devoted crowd in this intimate room; my first visit there. They opened with a Les McCann tune and continued on performing their own music and standards. Mike’s “H2” (one would guess named for Herbie Hancock) and Holly’s composition written for their dog (Emily I think) were both beautiful. Those two brilliant musicians are sophisticated and can swing.

Mozart’s Sister. This is her costume and the scene as we entered. 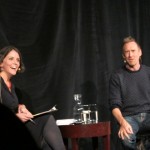 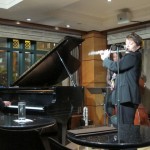 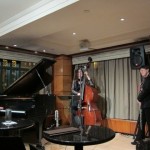 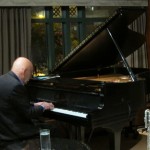 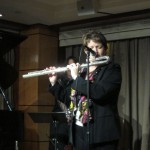