I attended the Artist Talk before the performance and that was a wise move as it helped me get through the bleak death driven performance. I knew this as I had seen the movie by Ingmar Bergman many years ago. But it is more difficult to separate oneself from the live-on-stage impact. Hearing the director talk about the many plays he has created from movies, especially Bergman’s was interesting. He was very articulate about his motives and is pleased with his work. “Cries and Whispers” in the lovely Harvey Theater where decay is omnipresent (except for the new and uncomfortable cushioned bench seating) enhanced the bleak and solemn play about death. It was beautifully performed and difficult to watch. The dying Agnes is surrounded by her two sisters who vacillate between caring and not, and Anna who works for the family and is the one who is there for her all the way through the misery of her dying days. It is very slow paced using videos and glass screens to separate and make transparent the various spaces. I am glad I saw it as it was very High Art but I am getting less tolerant towards the archness of such.

At BAM Cinema before the performance 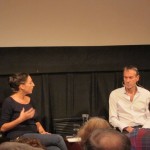 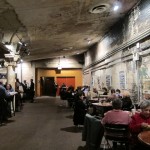 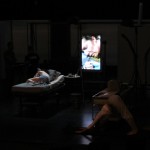 Scene before it begins – the bleakness continued