8 pm
Guy Klucevsek, compositions, accordion and piano with Mary Rowell, violin; Erik Friedlander, cello; Peter Donovan, bass. Mary, Erik and Guy toured together 23 years ago and luckily Guy put them all together again tonight. I had not heard or met Peter Donovan before so this was also a treat. Guy and Peter played together on Broadway’s “Fiddler on the Roof.” Guy opened with a solo accordion piece, “Loosening Up the Queen” (1987) and then they played as an ensemble the rest of the set. All the compositions were by Guy who also played piano and melodica on a couple of pieces. Gotta say that “Flying Vegetables of the Apocalypse” (1988) was special for me. However, it was all wonderful. I hung out after the concert with Mary, her friend Kevin Norton and Pete at a nearby bar after the gig and before I ran back to The Stone for the next set.

10 pm
David Behrman, violin and electronics with Peter Zummo, trombone. I have long admired both these musicians so it was a pleasure and a privilege to hear them perform together. David’s electronics are always interesting and good sounding and Peter’s trombone which was often effected by David added great warmth and texture. He also used various other noise making thingys. Usually I don’t like do-dads but Peter uses them to add lovely sounds and not just weird noises. A good night over-all. I was hoping to have live photos of this but I didn’t bring my camera and the photos which were to be sent to me haven’t been. 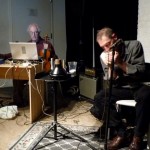