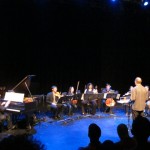 This was a night that blended composition and improvisation which is currently oten the case in contemporary music. Varese, Peter Evans, Jason Eckardt, Earle Brown, Xenakis, and Alvin Lucier, who was in the audience, were the composers. Varese’s “Graphic Score” for trumpet, tuba, piano, guitar and drums began and ended the evening; the first being very very short. Xenakis’s “Dmaathen” (1976) was performed by Steve Schick, percussion and Claire Chase, flute. It is always a pleasure/thrill to watch Steve perform. His meticulousness is amazing and I don’t just mean the notes he plays but also how he moves and looks. One knows that each movement has been thought out - where he puts the pages of the score as he completes them, where and how he places the sticks/mallets, and how he turns to each instrument. The compositions he often performs are so complicated (like Brian Ferneyhough) that I’m sure they would often be a mess in the hands of others. And Claire, I am learning from now many hearings, is an amazing performer (btw, also from San Diego). Lucier’s “ICEicles” for flute, clarinet, tuba, and piano was created for ICE in 2010. It was nice to see him there. I have long admired his work. Some of the other compositions were a little too-musicy for me, but then what do I know? Mary Rowell, a new and now good friend, and I met for dinner at The Green Table, a great farm-to-table place in the Chelsea Market, before the concert. Delicious food. 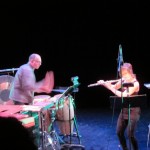 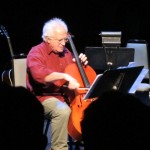 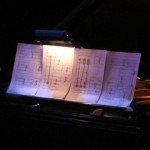 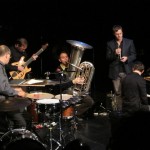 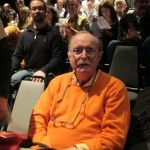 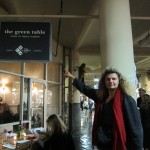 Before the concert – Mary Rowell 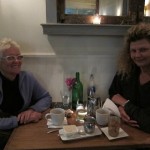 Dinner at The Green Table 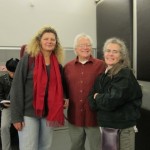