“That Morning Thing”: An opera by Robert Ashley 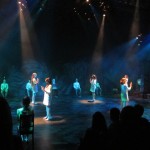 This opera was created in 1968 and thank god it has been revised by Performa 11 and co-presented by The Kitchen. There is no way I can accurately describe this performance except to say, as with all of Ashley’s creations, it is touching and human. Act One, The Frogs, opens with the eight Women seated on both sides of the room with the four Men and the Speaker, John Hagan, along the back. The women dressed in white then stepped carefully to form duos while their sparkly, flashing glasses shined at us off and on. The men spoke numbers and phonemes while The Speaker read to us about frogs and language and its possible demise: “Language could become obsolete, could be replaced with new modes of communication . . . language is the only bond between humans.” He thinks of frogs and nuclear waste as analogous to canaries in the Coal Mine. We heard examples of the 92 sounds that frogs make. While the Speaker was wonderful and clear, I kept hearing Ashley’s voice in my mind; the music he makes while speaking is remarkable. Act Two consisted of the singer, Imani Uzuri, speaking/singing 1, 2, 3, 4 with lovely inflections and pacing while “Blue” Gene Tyranny performed on synthesizer. This was followed by The Dancer posing variously to a devastating prerecorded story of her wrenching sexual abuse told non-emotionally in what sounded like a telephone conversation. “I remember he put his gum in my mouth. I remember he put his tongue in my mouth. I remember he sucked my tongue. I remember he opened his pants. I remember he pulled my head down on it. I choked. . .” Tyranny and Imani continued, this time she only counted 1, 2, 3, now with more desperation, even anger. Who could blame her. Act Three, Fast Forward, The Director, in fact and as an actor, now took questions from the Women: “Where is Columbus Circle, Where is the Upper East Side, Where is California, Where is the Statue of Liberty”, each question interrupted by a loud buzzer. He answered each while moving around the lighted grid on stage, ending with "Why is it that it is so difficult to remember sometimes, but so easy to forget. Yet, when you really WANT to forget, it is so excruciatingly impossible.” This is the sort of question that Ashley consistently asks -- questions that touch us all in the midst of the mundane. Ending the performance, 4 of the Women entered each of the two aisles and gently led us in pronouncing the phonemes of She Was A Visitor while the Speaker repeatedly spoke the words. I was sorry the evening ended. Ashley’s creations are ART, but not Artsy. They are conceptual, but not academic. Great beauty but no easy answers. 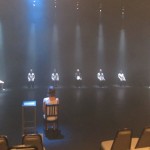 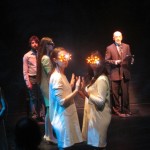 Act One – glasses designed and made by James Lo, The Speaker, John Hagan 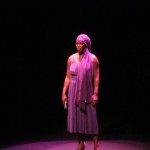 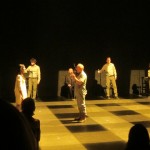 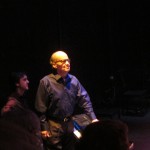 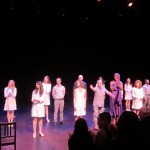 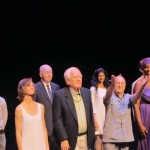 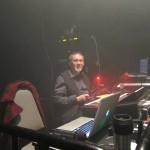 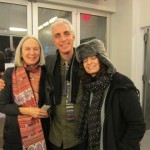 Mimi Johnson, Josh and Loren Simons (their daughter, Aliza, was one of The Women) 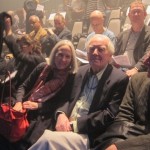 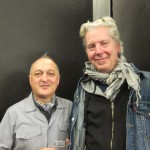 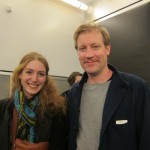 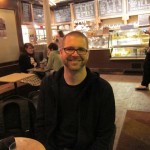