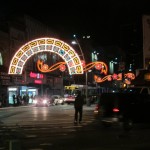 Here was a dance/theater performance that was terrific, had a serious story to tell but was also fun. There was an interesting and informative pre-performance talk with Paul Lazar, Annie-B Parson Co-Directors - Parson is also the Choreographer - and Anne Carson, translator of “Alkestis” written by Euripides in 438 BC. Since I know nothing about Greek Mythology, the talk was very helpful. Lazar, when asked about the name “Supernatural Wives,” he said truthfully that it was for marketing purposes as Greek Tragedy is not always a big draw! One of the quotes I liked, or at least took notice, is “We are all debts owed to Death.” This is a mythic tale of King Admetos who avoids death by arranging to send a surrogate to die in his place. His wife, Alkestis, volunteers for the assignment; hence the drama unfolds. The panelists talked about psychological and mythical differences and how Euripides leaves one in the midst of life questions and how the severe and relentless shifts between comedy and tragedy are portrayed throughout the performance. The performance opened with Big Music, rock and roll-like; the women in pants and the men in skirts -- off to a good start. The cast consisted of 3 women and 3 men. The role of King is performed by Molly Hickok so messing with gender roles seemed part of the play. I was impressed and entertained by the whole deal: the acting, the dancing, the story, the costumes, the videos and the music, some of which was our BoaC guy, David Lang. He does such interesting work, including the music for one of my favorite movies, “Untitled.” Hercules makes an impressive appearance loudly playing a drum set, flexing his big muscles and being oh so manly (and funny too). Chris Giarmo, one of the dancers was also a fabulous singer. In the notes it mentions he is also in Muhly’s new opera, “Dark Sisters” and is working on his first album which I plan to buy. Overall a good night. Love those. 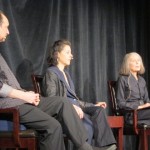 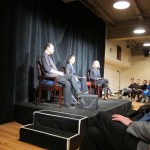 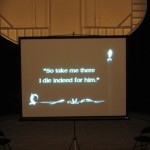 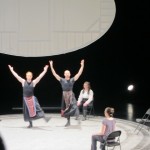 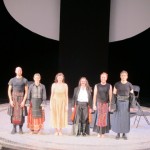