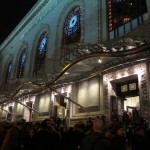 These pre-performance talks are very helpful and interesting as I didn’t know the history of the Company. For one, I learned that Gavin Bryars has a very good and wry sense of humor.

I don’t mean to be overly effusive but . . . this was one of the most beautiful performances I have ever experienced. It was glorious. The first piece was “Second Hand” (1970). It was sparse with no redundancy whatsoever. Robert Swinton began with spare movements; the stage was bare, and the music was solo piano beautifully performed by David Behrman. The other dancers joined in but remained minimal rather than lavish. The costumes, designed by Jasper Johns, were tights of complementary colors each different but, as we could see only during the final bows, related and blended with each other. The second piece was “Biped” (1999). Music by Gavin Bryar who performed on double bass and synthesizer along with Loren Dempster - cello, John King - electric guitar, Takehisa Kosugi - violin and percussion. The costumes by Suzanne Gallo, the decor by Paul Kaiser and Shelley Eshkar, and lighting by Aaron Copp. I mention all the collaborators as, to me, the performance was truly awesome because of these components. The dancers performed behind a scrim upon which beautiful images were projected: light beams, circles and, best of all, line sketches of dancers who filled the scrim vertically and moved across the stage. I shouldn’t admit this but it brought tears to my eyes and that doesn’t happen so often. Robert Irwin and Van Gogh can have the same effect on me. Once again, I wish I had more descriptive powers. This was a night I will not forget: pure beauty. 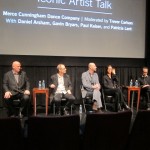 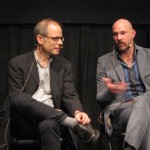 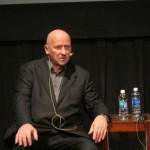 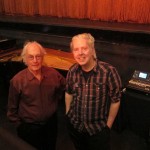 David Berhman and John King in the orchestra pit. 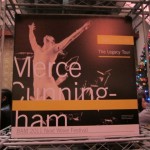 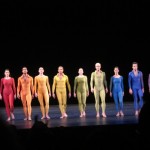 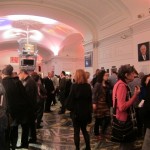 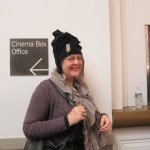 Terri Hanlon with her new hat. 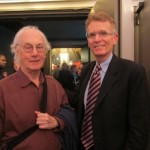 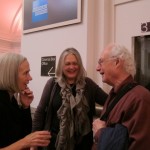 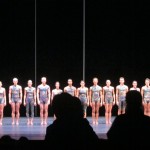 Wish I could have captured all the glory of “Biped.”