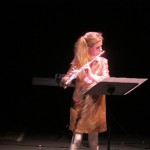 These concerts are a highlight for me in San Diego. The students are so talented and they perform music that is not often played in our town. Thank you.

Amazing concert and performance. I seem to love all things Icelandic and she is that. As well as the music, her costumes, videos, and overall demeanor were beautiful and joyful. The first three pieces were by Nick Deyoe, Carolyn Chen, and Clint McCallum, UCSD grad students. Always interesting to me to see how creative these young composers are. They add to the solo flute with amplification, dance, orchestra on tape, and voice. Leslie Leytham sang on “Twinzies” by McCallum. After intermission, Berglinds’s creative performance which included video, singing, dancing and tossing flower petals. She wore a crown of lights with a sparkly veil, at one point using a fan to dramatically blow her blond hair and the veil. Fun.

I loved that the theater was almost full with both students and “grown-ups.” I was also really pleased to hear “Three Voices” by Morton Feldman, written for Joan LaBarbara in 1982. The text is from a poem, “Wind,” by Frank O’Hara. The program notes were interesting and educational. Apparently this was the only vocal work from his last decade. The concert was fascinating. It was performed by Jessica and two pre-recorded voices -- hers, I am assuming. It is a piece that varies in length; this version was one hour. For me, all his compositions evoke underwater scenes - slow moving and
full of beauty.

This was held in the big hall where the acoustics are very clear (and sometimes a bit piercing). The first number was “3 studies for Eb clarinet by Giacinto Scelsi. Very intricate and fascinating. The second piece was “Dal Niente (Interiur III) by Helmut Lachenmann for Bb clarinet. Here’s where the good acoustics were amazingly helpful. One could here the are parts of the piece that are breathy, with tongue slaps, very quiet parts, and even the silence seemed more so.

After intermission was “odd and even.” Chris Warren, guitar/electronics, and Kris Apple, violin, joined Ariana and 5 dancers also performed. I was initially leery about the dancers as I have seem a lot of bad “interpretive” dance but this was a great and happy surprise. The dancers AND the choreography were very good. Whew. 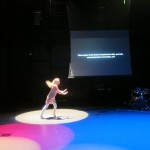 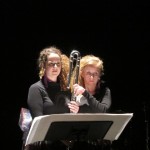 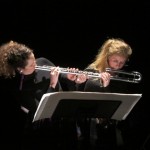 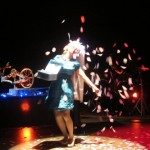 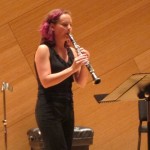 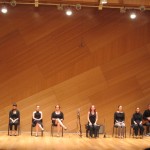 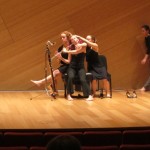 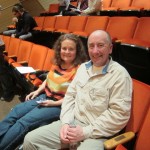