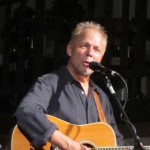 A nice crowd attended this birthday celebration where five groups sang the “Best ofBob.”  I went particularly to hear Chuck Perrin who has over the years presentedmusic in San Diego but I had never heard him perform and it was a treat.  First up was Sven-Erik Senholm & Brooke MacIntosh. They aptly performed “Along the Watchtower” among other tunes unfamiliar to me.  Second set was Steph Johnson who I think is mainly a jazz singer who performs locally to acclaim.  She has a lovely mellow voice, plays guitar and sang two songs which she had learned for this evening.

Then Chuck who was my favorite of the night.  He sang and played guitar accompanied by Jamie Shadowlight on violin.  Chuck first read some Dylan poetry and throughout his set we all could tell how important Dylan has been (and still is) to him.  He knew each song so well and sang with great heart and soul bringing depth to each word. He sang the first song he learned, “Blowin’ in the Wind” which was written in 1962.  Another good one was “Just like Tom Thumb Blues.”  He and Jamie complemented each other beautifully.  The fourth set was by Greg Pluth, a long-time friend of Chuck’s.  They went to high school together and he came to San Diego from Washington State to perform Dylan’s music which he has playing for those decades.  He too brought great passion to the music he has loved for years and his guitar playing was terrific. “Tomorrow’s a Long Time,” “Don’t Think Twice it’s Alright” were included.  The final group, Folding Mr. Lincoln, usually consists of six members but tonight only three performed.  They were good and brought more of a country vibe to the night - two guitarists, one vocalist who also played conga and tambourine.  It was nice to be there, especially to hear Chuck at long last. 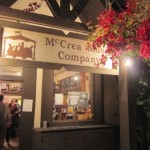 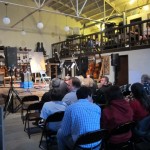 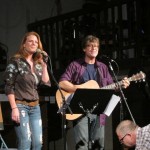 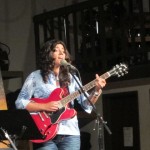 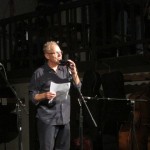 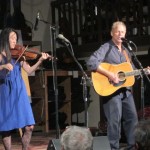 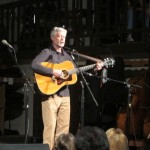 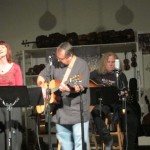 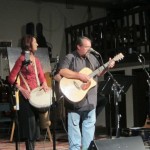