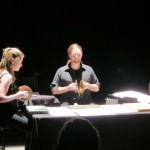 How they keep coming up with amazing new works continues to dazzle me.  Steve Schick not only teaches his grad student ensemble technique, he choses compositions which are varied, new, and highly engaging (that’s an understatement).  And he stages each number in a way that is perfect technically and visually.  This night was no exception.  The first piece was movements I, V, VI of “Drama” (1996) by Guo Wenjing. Wenjing now teaches at the Central Conservatory of Music in Beijing. The program notes don’t talk about the compositions, but this was for three cymbals performed by Louise Devenish, Kjell Nordeson, and Stephen Solook.

Who knew the cymbals could make so many sounds utilizing mallets, sticks, hands, mouths. They tapped, yelled, whistled, resonated, knocked, rang, and were over-all glorious.  The musicians sat on three sides of a small square table and even their scores were efficiently and attractively arranged.  Aldo Clementi’s “L’Orologio di Arcevia (1976) was the largest ensemble of the night with 4-hand piano by Aleck Karis and Brendan Nguyen; Stephen Solook and Eric Derr on chimes; Bonnie Whiting Smith and Dustin, vibraphones; Kjell and Leah on Roland Keyboard, Alice Teyssier and Jeffrey Trevino on celestes, Louise Devenish and Jonathan Hepfer, glockenspiel. Sonic beauty wafted around the room with musicians entering in and fading out taking us with them on this journey.  Schick sounded the gong.

After intermission we audience members were treated to a piece which I cannot imagine is performed too often: “Maladetto (1969) by Kenneth Gaburo. The notes say his work is uncompromising and I buy that. He was one of the few composers to think about music-as-language and vice versa.  He was part the UCSD Music Dept. faculty from 1967-1975.  This piece is all about The Screw, a full, very full, description from all perspectives.  The most detailed reading was by Steve Schick and I could understand every word he spoke over the at least 45 minute performance.  There were two singers who spoke more dramatically, Leslie Leytham and Eric Derr. These two, I think had some gibberish included, or I hope that’s what it was.  Four members of red fish two fish, Bonnie, Leah, Dustin and Jonathan Hepfer sat on stools and were the verbal/textual choir.  They spoke in alone and together and they occasionally laughed. We did too.  I am guessing that some of the choir’s language discussed, or at least implicated, the other kind of screw.  Mind you, this is a piece that requires rapt attention as Schick goes on and on about Screw descriptions, manufacturing, legal issues ad infinitum: “Groovy shafted nail” and “invaluable device for holding things down” and the endless screw was discussed by Archimedes around 1402, and a long reading of screw specifications from the Unified Thread Standard (ATS) and the complicated process of replacing obsolete screws with new ones.  Fascinating.  Really. 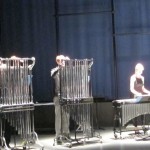 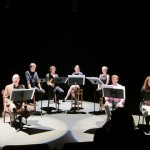