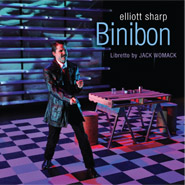 The Binibon was a cafe and 24-hour hangout on 2nd Avenue at 5th Street in the East Village, a nexus for artists, musicians, neighborhood characters and bohemians true and faux. It was a place in which I spent many an hour drinking bottomless cups of terrible coffee during 1979-81, meeting people, reading, hatching projects, observing, listening. Typical guests at the Binibon might include various No Wavers and Lounge Lizards; bebopper Jimmy Lovelace and free-jazz gypsy Don Cherry; Jean-Michel Basquiat; William Burroughs; Quentin Crisp; Kid Creole, Coatamundi, and Coconuts; Johnny Thunders; Keith Haring; Allen Ginsberg; Liquid Liquid; avant-garde filmmakers, actors and directors famous and non-. I was friendly with the all of the staff at Binibon and the events that unfolded affected me greatly. Jack Henry Abbott was a talented writer, as well as an imprisoned killer who became the protege of author Norman Mailer who helped sponsor his release into a halfway house on 3rd Street. He was well-known in the neighborhood and in the local press. I was in the Binibon that summer night in 1981 after a gig and left just as Abbott was entering with his entourage and found out about the murder a few hours later. This tragic event shocked us all and came at a time of transformation in the neighborhood, its culture, its daily life, its real-estate, and its future. Soon after, I began thinking about how I might tell the story of this event. This work is the result of over 20 years of memory and reflection. The song “Irreversibility” was written that summer shortly after the murder. It seemed appropriate to include it within Binibon as it well reflected the mood of the ’hood at that time.

I knew that Jack Womack was the perfect writer to translate this project into words and asked him to create a script in 2004. We first presented the work as a series of readings at the 2005 Howl Festival. It was presented again in this form at Roulette in 2007 which led to The Kitchen commissioning the work for a full theatrical presentation. I soon met Beth Morrison who was to become my producer and through her, Tea Alagic who became the stage director. I’m grateful to all of our collaborators and supporters who helped bring BINIBON to life. Listening just to the audio documentation of the performances led me to this manifestation of Binibon as a radio play.

An unremarkable restaurant on the corner of Second Avenue and East 5th Street, the Binibon had loyal customers, mainly because it was the only place around that stayed open 24 hours. Outside, it was the height of Reagan’s Cold War paranoia, with its gunboat diplomacy, the collapse of civic institutions, and inner cities racked by upheaval and decay. Inside, it was the night of the living myth of The Next Big Thing.

With its long, charged history as a radical Bohemia, the Lower East Side was drawing more and more artists and musicians into its non-stop party scene. They arrived along two strong currents: the explosion of clubs, galleries, and performance spaces, and the hip-hop movement’s express train ride from the South Bronx into graffiti-based downtown venues such as the FUN gallery. From a table or booth in the Binibon, you could watch the overflow of outsized hairdos and personalities arriving from the Pyramid Club, the Saint, Wigstock, or PS 122. An almost childlike exuberance sometimes looked reckless alongside more caustic discourses about the politics of devastation, which stood by as AIDs, heroin, and landlord-fueled torches laid waste to old neighborhoods and wiped out local heroes.

In the early morning hours of July 18, 1981, the Binibon was crowded, as usual. The owner’s son-in-law, Richard Adan, was doing double duty as night-manager and waiter. Adan was a handsome, well-built Cuban-born actor and writer and had just learned that, come next summer, La Mama Theatre Company was set to stage his new play. In terms of talent and potential, big hopes in lean times, Adan had a lot in common with his customers.

Around 5 am, Adan took an order from two college women and their companion. The man asked Adan if he could use the men’s room. When Adan explained that it was off-limits to customers, a quiet argument ensued, and the two men left the restaurant. Less than three minutes later Adan was dead on the sidewalk, a knife deep in his heart, his killer headlong into flight.
The next morning, while front pages carried the news of Adan’s death, the Sunday edition of the New York Times carried a review of a new book, In the Belly of the Beast. The author was Jack Henry Abbott — the same man that witnesses had identified as the man who had plunged a knife into Richard Adan’s chest at the Binibon. The whole story of what happened at the Binibon would not be revealed for months, after Abbott’s capture and testimony at his trial for second-degree murder. But Abbott was already a notable figure, a paroled convict with a harrowing past and, until that morning, a promising future.

Norman Mailer, the famous American novelist, was instrumental in shaping that future. While he was writing The Executioners’ Song about convict Gary Gilmore, Mailer began a long correspondence with another Utah state prison inmate, Jack Henry Abbott. Since age 12, Abbott had spent all but nine and one-half months in state institutions. He offered to be a consultant for Mailer, providing him with eye-witness accounts of what life as a prisoner was really about. Some 2000 pages later, Abbott had described every facet of prison life, including the complex relationships between prisoners and guards, and the soul-destroying torture of solitary confinement.

The details were “intense, direct, unadorned, and detached” Mailer later wrote, “an unforgettable combination.” But it was Abbott’s unique, authentic voice that compelled Mailer to act, first by spearheading a campaign to get Abbott paroled, and second by getting his publisher to turn Abbott’s letters into a book. Despite the strong reservations of prison psychiatrists, Abbott was paroled in the employ of Mailer as a research assistant in June 1981. Almost at once, he became the toast of the literary elite. He was a guest on the Today show, was interviewed by Rolling Stone, and was featured in People magazine. On the day he was finally arrested, several months after Adan’s killing, he learned from police that his book had become a best seller.

At his trial for second-degree murder, Abbott took the stand and claimed self-defense. According to Abbott, after he and Adan had left the Binibon, Adan had made a threatening move. Before he knew what had happened, Abbott testified, “the knife was in his chest and it was dead still.” He described the event as “one of the most tragic misunderstandings I can imagine.” Believing that a lifetime of incarceration had damaged Abbott’s ability to judge, the jury convicted him of the lesser charge of first-degree manslaughter. When it came time for sentencing, Judge Irving Lang declared Abbott’s conviction to be “an indictment of a prison system that brutalizes rather than rehabilitates.”

More scathing criticism was reserved for Mailer and the New York publishing community. That Abbott was a violent, dangerous man was undeniable; Abbott said so himself. “The evidence was everywhere,” one commentator wrote, “only an intellectual could have missed it.” Mailer later acknowledged his role in the tragic story as “a study in false vanity” – an episode in his life that caused him nothing but shame.

On February 10, 2002, a guard at Wende Correctional Facility near Buffalo, found Jack Abbott hanging from the ceiling of his cell, a bed sheet and shoelaces wrapped around his neck. At his family’s request, Dr. Cyril Wecht performed an autopsy that confirmed an earlier report that the death was a suicide.

Although Abbott acknowledged his deeply violent nature, he felt that he was not responsible for what the government, its system of justice, and its prisons had done to him. His most powerful letters describe “the hidden, dark side of state-raised convicts,” those who emulate the model of a “fanatically defiant and alienated individual who cannot imagine what forgiveness is or mercy or tolerance, because he has no experience of such values.” He did not seek revenge; instead, he wrote in his book, “I just would like an apology of some sort . . . Just a small recognition of the injustice that has been done to me, not to mention others like me.”

Composer, multi-instrumentalist, and producer Elliott Sharp has been a central figure in the experimental music scene in New York City for over thirty years and currently leads four ensemble projects: Carbon, Orchestra Carbon, Tectonics, and Terraplane. He has pioneered techniques of applying fractal geometry, chaos theory, and genetic metaphors to musical composition and interaction and has collaborated with a diverse range of artists, including Ensemble Modern, Qawwali singer Nusrat Fateh Ali Khan, the Radio-Symphony of Frankfurt, koto virtuoso Michiyo Yagi, pop singer Debbie Harry, computer artist Perry Hoberman, blues legends Hubert Sumlin and Pops Staples, jazz greats Jack deJohnette and Sonny Sharrock, and Bachir Attar, leader of the Master Musicians of Jahjouka from Morocco. Sharp's work has been featured at festivals worldwide, including the 2008 New Music Stockholm festival, the 2007 Hessischer Rundfunk Klangbiennale, and the 2003 and 2006 Venice Biennales. He has composed for video artist Nam June Paik and for filmmakers Toni Dove, Jonathan Berman, and Illppo Pohjola. His sci-fi opera for teenage performers, "About Us" was commissioned by the Bayerische Staatsoper in Munich and premiered in July 2010. Sharp's work is the subject of a documentary film, "Doing The Don't" by Bert Shapiro.

One of the landmarks of this forgotten New York was the Binibon, a 24 hour joint at 2nd and 5th, a scene hangout back in the late 70s-early 80s. It’s also the title and subject of Sharp’s opera, with a libretto by Jack Womack. The Binibon is where Jack Henry Abbott, back in the City due in no small part to Norman Mailer’s slumming, encountered waiter Richard Adan, and soon after stabbed him to death. Sharp and Womack’s Binibon is based around this tragedy, follows a narrative of personal memories and regrets through a handful of characters, including Abbott, culminating in the event that the piece represents as a symbol of the end of an era. The murder, and the closing of the Binibon, happened in 1981, well before the riot, but like I said, the struggle had been lost by 1988, perhaps the opera explains the beginning of the end.

This is an excellent piece. It features long, spoken narration, but straight forward, not in the manner of Robert Ashley. There is singing too, but it’s a real opera regardless of the balance between speaking and singing. Sharp’s music supports the text beautifully and tells the story in its own way. Womack’s libretto is tough-guy-romantic in style, a bit clichéd but saved by its sincerity. The band; guitar, saxophone, clarinet, bass, drums, percussion and electronics, is great, because it’s all Elliott Sharp – he makes and plays all the music, a rich melange of punk, jazz, rock, beautifully heavy early hip-hop beats. It’s forceful, expertly colored and judged, always interesting. This is a truly impressive work on CD, involving, fascinating, emotionally powerful, one of the most accomplished new, non-standard operas I’ve heard in a long time.