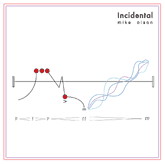 
Mike Olson, composer and musician with 18 other musicians

This is a relatively large scale six-movement piece which I began working on in 2004 and finished in 2009. I named the piece "Incidental" because it reminds me very much of incidental music - as in, music written to reinforce visual activity of one sort or another. The music sounds like action to me.

There is no actual "score" for this piece, The parts consisted of a number of verbal instructions and graphical gestures which each of the performers had to interpret. There were also a number of traditionally notated fragments used in the string sessions. The performers were recorded individually (for the most part) without hearing each other. This gave them the freedom to create their own interpretations without being influenced by what the others had done. These fragment recording sessions yielded a large amount of musical material. This material was edited down to what became in the end a very large palette of thousands of musical fragments that I then used to construct the actual finished music.

One thing that I find particularly appealing about this method of music creation, is that it combines the elements of composition, performance and recording into one tightly integrated process. Of course, a composer generally has control over the musical materials (pitches, rhythms, dynamics, etc), but the performance is always a bit of a wild card, and if you're fortunate enough to get a musically transcendent performance of your material, you've got to hope that you were able to get a good recording of it. With my method of composing, an excellent recording is a given, seeing as I have complete control over that. I've also found that I am able to exercise a remarkable amount of control over the performance, or what the listener would perceive as the performance. As I construct the finished piece in the computer, I essentially create a new performance as part of that same process. At that stage of construction, I am manipulating musical materials and creating a performance as one integrated process; the two are now inextricably interwoven.

Another release from Henceforth, further undermining my characterisation of them as a jazz label: let's call it modern eclectic.

For this album by Mike Olson, I want to do something unusual in a music review - put in a spoiler alert. When I finally got round to listening to this, I hadn't read the liner notes or PR material. It struck me as a complex ensemble work - horns, woodwind, drums, guitars, vocals, keyboards, strings - which slithered and moved around. Then I read how it had been made, and it revealed a whole new perspective - what had already impressed now amazed. Because the whole work (45 minutes) is an assemblage. Each musician was recorded separately, playing a score (verbal and graphic gestures), and Olson cut, selected, manipulated, layered and combined these pieces to form the 6 Incidental tracks. The method reminded me of John Wall, but the outcome is quite different. rather than the minimal pieces Wall works with, Olson has taken full units and combined them. It is a seamless construction and the knowledge was a little like the reformatting of the your understanding the whole that comes at the end of a movie like Sixth Sense or The Others.

And while sometimes method trumps outcome, in this case the outcome is well ahead. Olson called the music as Incidental as it reminds him of that form - 'written to reinforce visual activity ... the music sounds like action to me'. You could also say it is composed from incidents which have been brought together.

The feel is of experimental freeform jazz - there are fluttering woodwinds and some squonking brass. But there are also lovely strings - creating a foreceful opening, or orchestrated beautifully in Incidental 3 - driving drum percussion, guitar. And voices - soft, processed, laughing. Some periods remind me of Zappa, others are tonal ambience, while the fragmented origin is also heard in some passages of super-human playing. The shift between active and at times aggressive playing (4 has some NINish elements) and ambient passages is handled dexterously, and the narrative of each track reinforces the filmic element that Notes in the liner (6, for example, starts quietly, builds a rocky fusion middle before easing into an ambient final section). And like a good filmscore separated from its visual home, this is music that makes you take notice and listen - to the skill of both players and composer.

"Incidental", by Minneapolis composer Mike Olson, is an intricate and amusing work, which chews and spits the author's accumulated experiences with a constant alternating tension between 1970s vintage Jazz and Rock. His scheming and fumbling with the Moog and Fender Rhodes exemplify this. One can also hear a love for sound tracks composed by Carl Stalling for Warner Brothers cartoons and Walt Disney.

The work consists of six passages, composed of rapid flows of sound, which get squeezed to perfection. The malleable and elastic materials are changing continuously. Jazz and Prog Rock in opposition, with an obvious kinship to the contiguous works of The Fantomes, (on Ipecac, a label on which Olson could appear). The music is fast and subtly tribal. It chops avant into a sauce, quickly and subtly melding the elements of Jazz and Rock, with a slight preference for the darker moments, where the listener is drawn inside a 1950s horror sound track. Also beautiful are the muscular outbursts of passionate rage, using saturated guitars and noisy arhythmics, from a vision close to that of Bill Laswell. A slight executive self-gratification weighs down certain passages, but hardly impairs the overall impression, which is very positive. (Take caution, given the peculiarity of the proposition. It is something, however, not to be underestimated. Seek to listen to it first.)

Minneapolis composer Olson writes/assembles fragments for his ensembles, here an eighteen-piece of strings, brass, guitars, keyboards and rhythm section, which the composer then breaks down and reconstructs on his Mac, similar to the computer process music of Bob Ostertag. On this CD the pieces are like cinematic incidental music – hence the title – "because it reminds me very much of incidental music". The result is a storm of ideas ranging from a wild harmolodics-like opening, to wide-open airy Ligeti-ish string pieces, deep jazz-rock groove in the manner of early Weather Report, interruptions from hardrock guitar, big band buffoonery reminiscent of the Willem Breuker Kollektief or early Carla Bley, all treated through the composer’s computer and accompanied on his trusty Moog. What impresses most here is the ambition of Olson’s vision – as well as similarities to Ostertag, you can also hear Ives and Cage, as well as TV cop show car chases and ghost movie atmospherics – perhaps we have to wave hello to Holger Czukay as well. The whole may not entirely hang together (perhaps by the very nature of the "incidental" enterprise) but for sheer breadth and scope, it resembles a miniature, electroacoustic Escalator Over the Hill.–JG
www.hurdaudioblogspot.com

Mike Olson is a Minneapolis-based composer, producer and keyboard player. For this most auspicious debut disc, he has gathered some 18 musicians, only three of whom I know from previous sightings: cellist Michelle Kinney, who used to live in NY and work with Louie Belogenis and Joe Gallant; Steve Tibbetts, prog guitar great with numerous discs on ECM and hot-shot bassist Anthony Cox, who also used to be more involved with the NY scene. None of that really matters that much since Mr. Olson is in charge and manipulating the sound as it unfolds and providing verbal instructions and graphical gestures. It starts with quirky Zappa-like strings over some sharp rhythm team action and soon turns into a swirling mass of tight fibers. Steve Tibbetts flies in to provide some great Frippish guitar while Mike creates some mesmerizing cosmic swirls by manipulating the overall sound. It is true that Mike keeps a tight hold of the music as it evolves through sections, fading one section into another seamlessly across different layers. Some of this sounds both ritualistic (ancient) and modern simultaneously. It also sounds like the soundtrack to a brilliant but slowly shifting series of scenes for a great short film. "Incidental 3" has that charming Canterbury whimsy that you don't hear very often nowadays, sounding as if it can handle complex rhythm shifts and is about to fall apart at the same time. There's a section where Mike plays some fine Dave Stewart meets Chick Corea-like electric piano, yet everything changes into something else soon thereafter before the spacy electric piano re-enters. Mike Olson's 'Incidental' sounds like some long lost prog masterwork that has somehow escaped from the looney bin of popular spotlight. Don't let this gem escape your grasp.

You want to give Mike Olson's Incidental (Henceforth Records) a good listen. At least, if you appreciate innovation--sounds by a composer who learned the rulebook, went outside it and, imaginatively transcending, decided to write his own page.

The label's press release extols the CD as having "diversity, intellectual rigor, and sheer sonic splendor," heralding the disc as an "intricate construction." All well and good. Accurate, too. Olson waxes madly adventurous into cerebral territory at the same time, making music the listener can feel. No mean feat.