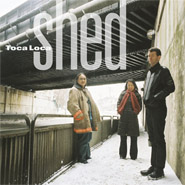 Half-Remembered City (Dai Fujikura)
This piece was written for Waka Hasegawa and Joseph Tong, a happily married piano duo. The composer was inspired by their sharing - a piano, a life.

"I wanted those four hands to be as close as possible...holding the keys silently so that when the other notes are played, suddenly those silent keys start ringing...if another duo wanted to play this piece, they wouldn't necessarily need to be married but it would be great to imagine other pianists getting it on after playing..."

Simon and I have conspicuously resisted its siren song. During passages where our fingers strain to interlock like a sadistic jigsaw puzzle, our hands bearing numerous cuts and scratches, the result of furiously rapid hand position leaps and shifts, we wonder if Dai wasn't unconsciously describing other, less celebrated aspects of matrimony. Dai also imagined the rapid-fire style of an MTV video depicting the overstimulated life he experienced growing up in Osaka: 6-day school week, 3 days of evening study class, piano, acting, swimming, no days off.

Ma'Mounia (Heinz Holliger)
This is the commissioned work from the 2002 Geneva International Music Competition, which our percussionist, Aiyun Huang, went on to win. The title comes from the Moroccan restaurant in Geneva where the commission was finalized. Rife with extended techniques, the percussionist finds herself at one point screaming at the top of her lungs, trapped in a massive setup played with superballs, rosined bows and metal rods, while the pianist throws cymbals onto the bass strings and the horn player shuns his mouthpiece for an oboe reed - Holliger is not exploring his instruments, but rather demanding of them specific and meticulously selected sounds. Ma'Mounia is a wonderland where timbres and sonorities exchange and merge, back and forth, and instruments describe a dream, and then dream about each other.

Adventuremusic: Love her madly (Andrew Staniland)
This is one of our favourite works to play. Scored for 2 pianos, 5 pieces of wood and 5 temple bowls, this piece also has a tape part which incorporates three elements: recordings of myself speaking (heavily processed), the sound of ice sheets breaking apart in Baffin Island and samples of Aiyun's temple bowls. There is a sort of ironic juxtaposition, as the latter, often representing meditation and introspection finds itself in counterpoint with one of the more identifiable symbols of climate change. Incidentally, each of the pianos has 5 prepared strings - Simon used masking tape, and I used screws.

Bring Them Home! (Frederic Rzewski)
Like Rzewski's "The People United", this work is a set of variations on a theme - in this case, a 17th-century Irish anti-war song, "Siuil A Run", about a woman whose lover has left her to go to war. Incorporating whistling, leg slaps, and the thumping of chests, pianos frames and boxes, Rzewski creates a militaristic framework, interspersed with variations that conjure different affects - some obviously lamentations, others more abstract, but always returning to some variant of martial regularity. The piece also contains episodic solos, where the players are invited to improvise if so desired. The piece ends quietly, elegiac or perhaps hopeful. Like many of Rzewski's other works, it speaks of the past, but turns our eyes to the present.

Simon Docking
Australian-born pianist Simon Docking has performed both as a soloist and chamber musician throughout North America, as well as in Australia, New Zealand, Malaysia and Europe. He studied piano in Australia with Ransford Elsley, and holds a doctorate in piano performance from SUNY Stony Brook, where he worked with Gilbert Kalish, and upon graduation was awarded New York State's Thayer Fellowship for the Arts. "Since 2001, he has maintained a varied freelance and teaching career based in Halifax, Nova Scotia, where he has also curated the new music series, Kumquat"

Aiyun Huang
Born in Taiwan, Aiyun Huang immigrated to Canada when she was seventeen where she pursued her studies in percussion with members of Nexus. She holds a Bachelor of Arts degree with honors from the University of Toronto, a Premier Prix from Conservatoire Nationale de Region de Rueil-Malmaison in France. and a Doctor of the Music Arts degree from the University of California at San Diego. She is an assistant professor and Chair of the Percussion area at McGill University. Huang was winner of the First Prize as well as the Audience Award at the 2002 Geneva International Music Competition; the first prize in percussion has been awarded only three times in the competition's 57-year history.

Gregory Oh
Canadian pianist and conductor Gregory Oh holds graduate degrees from the University of Toronto, where he completed his studies with Marietta Orlov as the top graduating pianist, and the University of Michigan, where he worked with Martin Katz. He has served as music director of the San Diego Opera Ensemble, and has also worked with Florida State Opera, the University of Michigan Opera Program, Michigan Opera Works and Lyric Opera San Diego. He has held faculty positions at the Banff Centre for the Arts, both in Music and Sound, and Theatre Arts, where he worked with the Contemporary Opera and Song Training Program. He recently joined the music staff of the Canadian Opera Company.

The disc musters four pieces of four composers: piano to four hands of Dai Fujikure, small orchestra around a percussionniste by Heinz Holliger, orchestra and bands of Andrew Stanisland, trio and percussion of Frederic Rzewski. The passage of a piece to the other proves itself perilous by the atmosphere changes that it orders. There is in these recordings a sort of respect of order, that the grades very enthusiasts of Gregory Oh, equally boss of orchestra of the body, do nothing to break. One meet again in the classical position of a recording of written music in front of which ask themselves the questions of the value of the work and of his interpretation. This is a working document on a music in course, works of which the said future importance. I will exempt nevertheless of these reserves the last and longer piece of the album, "Bring them Home!" (22'00). Built more simply than the others, of a continuation of variations on a theme, including a dimension mélodique marked that gives more latitude to the interpretation, she meets doubtless better the sensitiveness of the interpreters and succeeds in dramatic completely interesting effects.

Adventurous Canadian trio Toca Loca’s cryptically titled new album Shed is a strangely captivating, grippingly energetic, strikingly rhythmic collection of new and older avant garde music. Pianist/conductor Gregory Oh, pianist Simon Docking and percussionist Aiyun Huang muscle up on a demanding quartet of numbers made for headphones: you can get lost in this stuff. It’s a wonder they don’t too.

The first piece, Half-Remembered City by Dai Fujikura, is a samurai piano duo for four hands. Oh and Docking have injured each other while playing it. Much of it involves passages where one holds down the keys silently while the other hammers away so as to evince overtones out of the dampened strings. There are a lot of pregnant pauses, along with a little leapfrogging and some furtive scurrying and flying cascades amid the slambang staccato. The album liner notes make no mention of whether the pianists injured themselves this time around, or how (or whether) they avoid making mistakes, or if improvisation is part of the process. Either way, it’s impossible to tell.

Huang premiered Heinz Holliger’s Ma’Mounia in 2002 in Geneva. If anything she does here was overdubbed during recording, that’s understandable: she has her hands full, with seemingly an entire orchestra’s percussion instruments to run the gauntlet with in seconds flat. With vibraphone, gong, timpani and what sounds like bowed bells, she scurries uneasily with accompaniment from guests Max Christie on clarinet, Mary-Katherine Finch on cello, Gabriel Radford on French horn and Stephen Tam on flute. A section with what appears to be simulated applause, a series of long, bustling passages and then a lot of Messienesque birdsong against that bustle eventually winds down and bows out with a squeak. The group’s first commission, Andrew Staniland’s Adventuremusic: Love Her Madly is not a Doors cover but rather a hypnotic, low overtone-driven soundscape colored with rapidfire piano cascades, an Asian theme played on bells and a trancey woodblock solo. The album concludes with Frederic Rzewski’s Bring Them Home, one of his protest songs from the early 70s, this one based on a minor-key Irish folk song. In typical Rzewski fashion, the variations go pretty far afield of the original, with a boogie about a quarter of the way in and a hint of a military march about two-thirds through it. It’s unusually imagistic: Huang gets the motif de resistance, a woodblock solo that snidely mimics an earlier, martial snare drum passage. With wars still going on in Afghanistan and Iraq, it’s nice to see this piece getting aired out as vigorously as Toca Loca do it here. It’s out now on Henceforth.