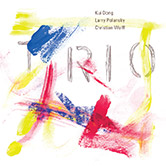 Trio (Kui Dong, Larry Polansky, Christian Wolff) is a group of three composers and friends, in Hanover, New Hampshire. We began playing in private about 15 years ago, with little or no intention of performing. Eventually, we were asked to do some concerts and residencies, but our original and more or less unarticulated reasons for playing (to enjoy playing music creatively together) are still the main idea. Over the years we have made archival recordings of many of our short improvisation sessions, but this is the first recording we have made with the intent to release it. We are thankful to Bonnie Wright and Henceforth records for offering such a commodious home to our playing. - Larry Polansky

As a trio, Kui Dong, Larry Polansky, and Christian Wolff might constitute one of the more unusual ensembles in the tradition of odd, ad hoc groups as established by Arnold Schoenberg with his Pierrot Lunaire instrumentation one hundred years ago. With its half-broken consort consisting of, generally, piano, piano (sometimes prepared), percussion, melodica, and fretless electric guitar (and sometimes mandolin, bass, and other instruments), Trio’s mix of winds, strings, and percussion offers a wide range of sonic possibilities.

The three musicians also join a tradition in contemporary American and European music in which ensembles consisting of improvising composers have flourished since the mid-1960s: Larry Austin’s New Music Ensemble, Gruppo di Improvvisazione di Nuova Consonanza, Musica Elettronica Viva (MEV), AMM, the Scratch Orchestra, the Art Ensemble of Chicago, and others. Sometimes composers compose. But sometimes they choose not to. Freeing themselves from the need to write notes down for others to play, they just play.

Dong, Polansky, and Wolff have been colleagues at Dartmouth College in Hanover, New Hampshire since 1990 (when Polansky joined the faculty where Wolff had been for some time) and 1997 (since Dong joined the faculty). They began playing together privately about once a week some fifteen years ago, and gradually started playing concerts, including venues in New York City, San Francisco, St. Louis, as well as residencies in Beijing, China, Morelia, Mexico, and Brigham Young University in Provo, Utah.
Free improvisation is an attractive and pleasing art form for its practitioners, but one that communicates in mysterious and confusing ways for its listeners. Perhaps it is the last step in the gradual breakdown of musical hierarchies that occurred over the course of the twentieth century, as it allows musicians to play together without ever talking about their plans, goals, expectations, or motivations. One might play or not, listen to the others or not, try to play harmoniously or not, drown out the others or not.

The diversity of ethnic experiences, stylistic backgrounds, and compositional approaches represented by Dong, Polansky, and Wolff—not to mention the large generational differences, with their birth years ranging from 1934 to 1967—makes this group somewhat different from other, more homogeneous composer-performer ensembles. Yet Trio does not market or highlight this quality of diversity, nor does it focus on anything less profound than just friends playing music.

“Once I started playing with the trio, I realized that improvisation is rather freeing. It might be the same idea as composition, except that you’re making each decision as you’re playing. In composition my normal process is that you have an overall structure and then make your decisions. But improvisation is that you play along and, as you do, you make your decisions. That means listening carefully to other people, sometimes compromising, and sometimes taking the lead. I think it’s a very intuitive, almost spiritual thing.” –Kui Dong

“When I’m playing in this trio the questions are not, to me, about improvisation. They’re about playing with Kui and Christian and what we are trying to do musically as a group. It’s not so much an investigation of the notion of improvisation as the investigation of a very specific set of circumstances and musical ideas. I think a lot about how Kui plays and how Christian plays. I think almost none about the general concept of the free improvisation versus some other kind.” –Larry Polansky

“Composing is a two-step (at least) situation where you write something, yes, but you’re still a long way from even knowing what you’ve done, what it is. Because the thing has to be performed. The music isn’t there yet. Whereas when you’re improvising, that step is gone. You just do it directly. You’re composing in real time.” –Christian Wolff

The quotations were taken from a panel discussion "Improvisation, Heterophony, Politics, Compostion" in Perspectives of New Music 45/2 (2007) 133-148 Amy C. Beal

Kui Dong was born in Beijing, China and received B.A. and M.A. degrees in theory and composition from the Central Conservatory of Music in Beijing. In 1991 she moved to the United States, where she obtained a Doctoral degree in composition from Stanford University. Kui Dong's compositions span diverse genres and styles and include ballet, orchestral and chamber works, chorus, electro-acoustic music, film scores, and multi-media art. Among the honors and awards she has received, most noticeably are the ISCM international composition prize, Austria's Prix Ars Electronics (Honorary), Italy's Val Tidone Composition competition, The Serge Koussevitzky Music Foundation, the Fromm Music Foundation, Mary Flagler Cary Charitable Trust, Meet The Composer USA/Commissioning Program, ASCAP Award for Young Composers and first Prize in the Alea III International Composition Competition and the first prize of China National Dance Music.

Composer, theorist, performer, editor, writer and teacher. He is the Strauss Professor of Music at Dartmouth College, the co-founder and co-director of Frog Peak Music (A Composers’ Collective), and currently teaching composition and theory at UC Santa Cruz. From 1980-90 he worked at the Mills Center for Contemporary Music, where he was one of the co-authors (with Phil Burk and David Rosenboom) of the computer music language HMSL, and a contributor to the widely-used program SoundHack (by Tom Erbe). He is also the co-author of Music and Computers, a webtext published by Key Publications. He is the recipient a number of prizes, commissions, and awards, including Guggenheim, Fullbright, and Mellon New Directions Fellowships, as well as the inaugural recipient (with David Behrman) of the Henry Cowell Award from the American Music Center. His writings on American music include works on James Tenney, Ruth Crawford Seeger, Lou Harrison, and Johanna Beyer. He is the editor of around 20 of Beyer’s scores. In 2004, at the request of Ruth Crawford Seeger’s estate, he completed and edited her major monograph The Music of American Folk Song (published by the University of Rochester Press).

Born in 1934 in Nice, France. He's lived mostly in the U.S. since 1941. He studied piano with Grete Sultan and composition, briefly, with John Cage. Though mostly self-taught as a composer, the work of John Cage, Morton Feldman, David Tudor and Earle Brown have been important to him, as well as long associations with Cornelius Cardew and Frederic Rzewski. A particular feature of his music is the various freedoms it allows performers at the time of performance as well as the variable results possible for any one particular piece, for which various new notations have been invented. Underlying notions in the work are shared freedom, self-determination and democratically-spirited collaboration. The music is published by C.F. Peters, New York and much of it is recorded, on many labels. A number of pieces, starting in 1953, have been used and commissioned by Merce Cunningham and his dance company. Wolff has been active as a performer and as improvisor - with Takehisa Kosugi, Steve Lacey, Christian Marclay, Keith Rowe, William Winant, the group AMM, Kui Dong and Larry Polansky. His writings on music (up to 1998) are collected in "Cues: Writings and Conversations", published by MusikTexte, Cologne. He has received awards and grants from the American Academy and National Institute of Arts and Letters, the Ford Foundation, DAAD Berlin, the Asian Cultural Council, the Fromm Foundation, the Foundation for Contemporary Performance Arts (the John Cage Award for music) and the Mellon Foundation. He is a member of the Akademie der Kuenste in Berlin and the American Academy of Arts and Sciences. In 2004 he received an honorary Doctor of Arts degree from the California Institute of the Arts. Academically trained as a classicist, Wolff was professor of classics and music at Dartmouth College from 1971 to 1999.

While Christian Wolff is most famous as a composer, here is the second disc of improvised music he published this year - after a memorable duet with Keith Rowe. Always at the piano, Christian Wolff is accompanied in this trio (which is still several years) by two musicians also composers: Kui Dong and Larry Polansky piano to guitar and mandolin.

An instrumental rather original two pianos and guitars, formation of plucked and beaten. But also an original aesthetic that is not from that of the instrumentation. Because during these five improvisations, we can constantly feel the influence of music written and scholarly. The three musicians do not focus so much on stamps or interaction, it is not strictly speaking interactive improvisation. The interest of these improvisations rather lies in the management and balance of tensions (atonal and arrhythmic) and relaxation (or modal harmonic and rhythmic). Management learned of the opposition combined with a permanent sensitivity to different dynamics. It should be noted also the sensitivity and virtuosity of each musician plays his instrument with precision, finesse and subtlety. Precision and finesse as to the instrument than to the trio itself and the sound space addressed during these improvisations.

That said, it is still five improvisations that can not necessarily always hold my attention or my interest, but have the merit of being original and adopt a singular aesthetic and instrumental. To listen with curiosity.