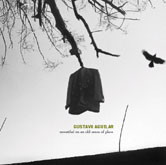 unsettled on an old sense of place


Gustavo Aguilar's unsettled on an old sense of self expands our horizon's. This is always good.
As Steve Schick says in his liner notes:

"Aguilar makes music where distinctions are not lost but where lines are not necessary. This is the music of perpetual welcoming. If you come from somewhere - from anywhere - you will find something of yourself in these sounds." . . . "Throughout this recording the places keep coming - invented places, remembered places; places desired and places abandoned. With all of them come new pathways of understanding, new translations of old languages."

Start with Texas. Now zoom in a little. Just west and a bit north of where the Rio Grande empties into the Gulf of Mexico. Zoom farther in to a street in the city of Brownsville, and to a small restaurant operated by Gustavo Aguilar's fatherÑa place that Gustavo Sr. still goes to every day in the quiet, dark morning. Brownsville is on the border - la linea, the line, as people call it. The line divides countries and traditions. But in this diner there are no dividing lines. A lawyer is sipping soup next to a mechanic who eats a salad next to a 'lady of the night.' She stirs a cup of coffee next to a doctor and his steak. Hunger is the great equalizer.

I can only imagine what Gustavo Aguilar might have been thinking in his childhood years in Brownsville. I have known him now for several years and still I can't say with any real certainty what he is thinking even today. I don't know what he thought, but I do know what he did with the memories and experiences of those early years. He remade the restaurant. In a world of sounds he recreated a place where you are simultaneously a guest and a denizen, a fully vetted insider and a casual passer-by. Aguilar makes music where distinctions are not lost but where lines are not necessary. This is the music of perpetual welcoming. If you come from somewhere - from anywhere - you will find something of yourself in these sounds. But if you think you can own this music, that you can hold it in your hand because it belongs to you and to your place alone, then you will soon find yourself empty handed, grasping not at something concrete and touchable but at pure evanescence. This is music not of a place you know, but of place you might once have been. It is a hymn for the many of us who grew up someplace but now live many places. Because at any moment we belong and fail to belong in equal measure, we feel at home here in the sounds on this CD. The feeling is, as Aguilar describes simply, of being "unsettled on an old sense of place."

Appropriately, we hear first Xochicalco (for Julio), dedicated to the great Mexican composer Julio Estrada. Estrada's music flows freely from the deep aquifers of Aztec culture and language, but it is hardly folklore. It is as much at home in the modernist scripts of late 20th century Europe as it is in the mythical past of Mexico. Following in the Estrada model, Aguilar does not quote but rather he summons a vanished music through a self-consciously appointed present. By asking performers to react spontaneously - thoughtlessly in the best sense of the word - to the deep memories incarnate in the real place Xochicalco, Aguilar filters one place and time through the lens of another.

Throughout Aguilar's music the powerful workings of translations like this are brought to bear. Translation is always a part of belonging to an unsettled place. If your story cannot be told through the language of its place, it must find a new language and a new place through which to speak. Contrafactum for Scelsi, based on Giancinto Scelsi's Ko-tha for virtuoso guitarist, becomes a percussionist's filial love song for his aging parents: a contrafactum turned serenade. Suprachiasmatic Nuclei - the name alone might send you scampering for a dictionary - is a multiple translation. The title refers to nerve bundles that regulate the many periodicities of human physiology and provides the metaphorical axis to a "composed reaction" to Steve Reich's Pendulum Music. Translation here outlines the shape of an hourglass: the inward spiral of Pendulum Music, as the microphones first swing in big arcs above stationary loudspeakers and later come to rest in a beautiful scream of feedback, is inverted in Suprachiasmatic Nuclei. Reich's process passes through the eye of the needle and, coming out the other side as Aguilar's music, spreads outward in an ever-expanding slick of noise.

There's more. In RoKaMaYoHa, a Mexican-American finds himself in Tokyo and with a few strokes of a pen on hotel stationary he reinvents the kabuki notion of wisdom revealed through the shock of sudden noise. Or in Dirac's Theory, a coin falls on a drum head and accelerates not to a standstill, as you might expect, but to a frenetic solo exploration of everything but actual drumming. This is playing at its very best - a "what-would-happen-if" approach that you wish would go on forever.

Throughout this recording the places keep coming - invented places, remembered places; places desired and places abandoned. With all of them come new pathways of understanding, new translations of old languages. And finally there is Wendell's History, a disarmingly attractive setting of Wendell Berry's poem "History," where all paths lead away from home, outbound towards a place of perpetual welcoming. It sounds inviting, especially when you hear it in the comforting resonance of Aguilar's accompaniment. But both the music and poetry have sharp edges where you least expect them. For Berry the impediments to be found in a task seem to be the surest mark of its worth and beauty. (Elsewhere he urges farmers to plant Sequoias as a cash crop!) Aguilar's music illuminates beautifully but not without the sharpness of accent. In the end though, for the music as well as the poetry, the outward journey is indispensable. How else, do you imagine, will poet or composer find that place where, "Until my song comes here to learn its words, my art is but the hope of song."

We have arrived at a far away place. But, zoom in again. The restaurant in Brownsville is still there. The lady of the night still sips her coffee next to the doctor. And, as before, there are distinctions but no lines. Now zoom out. Follow the path of Wendell Berry's farmer. Zoom out far enough to see everything - every bit of this gorgeous blue planet. If this is where you make your home then this recording is your anthem.

Gustavo Aguilar is a percussionist, composer, and improviser. He has been honing his craft as a music artisan for almost two decades. His commitment to combining pre-composed (notated) and present-composed (improvised) musical elements has earned him the reputation as an intuitive and a methodical mystic. His music has been called "beautiful, introspective and passionate,"(The Improvisor) as well as "thought-provoking and thoroughly fresh." (Signal to Noise). For well over a decade, Aguilar has dedicated himself to the Creative Musician approach to composition and improvisation with roots that can be traced to the 1960s and to Chicago's AACM (Association for the Advancement of Creative Music). He has been mentored by and performed with, Creative Music luminary and AACM member, Wadada Leo Smith, and has appeared as a soloist/group collaborator at major festivals throughout the Americas, Europe, Asia, and the Pacific, including IRCAM's Festival Agora (Paris), the Zagreb Biennale International Festival of New Music (Croatia), the Ulrichsberger Kaleidophon International Jazz and Improv Festival (Austria), the Copenhagen Jazz Festival (Denmark), and the American Composer's Orchestra Improvise! Festival (NYC.)

The trend in avant garde, improvised music these days is often guided by a sense of a "busting apart," of pieces being flung outward from a dissolved or imperceptible center, of small shards of ideas with no home or center to come back to; like thoughts without the mind to think them, like a mind without a body: an overall, disconnected impression. This is not the case with Gustavo Aguilar. As conveyed by his title, "Unsettled On an Old Sense of Place," while these shards of sound explore daring and limitless territory, there is an overwhelming yearning in these gestures for their center. While that center is felt to varying degrees, the paths that these shards travel to the core, like faint trails of smoke, are not tangible, but are perceptible. Without being horizontal enough to touch on the "soundscape" description, Aguilar's sense of musical development is not lost on one who is listening for form and who is hoping to be taken some place, rather than simply bombarded with random noise munchies. Despite the lack of meter or a bar line. Inspired by experiences from his childhood, these pieces are experienced like moving collages, not unlike a kaleidoscope of definitive, vivid fragments, playfully intertwining, rising, falling and transforming.

Private Note: I love your "GUSTAVO AGUILAR: Unsettled On An Old Sense Of Place" CD so much I'm going to feature it on the FRONT PAGE of CD Baby for a few days. We're REALLY picky about what goes on the front page. We get about 150 new albums a DAY coming in here now, (about 150,000 total), and yours is one of the best I've ever heard.

Gustavo Aguilar is a brilliant percussionist who grew up in Brownsville, where Texas meets Mexico. He now lives in New York, runs an ensemble call soNu and has located himself in music at a point where composition and improvisation geed into one another in extraordinary ways. Getting there, he has collaborated closely with defiantly heterodox musicians including Iancu Dumitrescu, Annea Lockwood, Anthony Braxton, and Wadada Leo Smith. Unsettled on an old Sense of Place features six of his own pieces, and it's a fabulously vivid experience. Xochicalco, dedicated to Mexican composer Julio Estrada, might be the soundtrack to a fever dream, its hallucinatory electroacoustics conjured up spontaneously by soNu, plus harpist Anne LeBaron and viola player Mary Oliver, in response to Aguilar's verbal cues and after preparatory listening to selections of Mexican music. Contrafactum For Scelsi is Aguilar solo, playing eclectic guitar as hand percussion - popping harmonics and pummeled clusters, his memory of Mexican serenades conflated with awareness of Italian composer Giacinto Scelsi's guitar piece Ko-Tha. RoKaMaYoHa is a stunning dramatic imagining of Japanese kabuki theatre, centered in kabuki's recurrent theme of revelation through sudden, unexpected noise. It's shrill and strange, with Nina Eidsheim's penetrating voice embedded in processed whistles and woodwinds.

Dirac's Theory is an intimate dialogue with snare drum: the percussion and percussionist drawing out all kids of unexpected nuance between themselves. With Suprachiasmatic Nuclei, Aguilar's declared intention is to address our neurological pacemakers; in practice this means 15 minutes of steady descent from well-defined articulation into ragged yet compulsive white noise. Wendall's History concludes the program, setting text by poet Wendell Barry against a glistening glockenspiel backdrop. Gustavo Aguilar is himself a defiantly unorthodox musician -- the kind we need -- and this is a wonderful CD.