Don Giovanni at The Metropolitan Opera 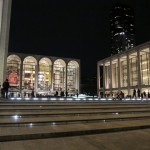 As one would expect, this is a big traditional opera and expensive to attend ($207.50). I went with friends who go to many operas; this was my one for the year. I enjoyed it although it was panned in the NYTimes, not for the singing but for the lackluster production. I guess I agree with that but have no real basis for comparison. The colors throughout were drabbish - mostly muted tones. The one bright color all night was the red curtains which appeared occasionally in the background. The dancers added a dab of color but the sets were brick-like and the costumes for the company consisted of black, grey, umber, browns. That was okay for me. I prefer that to the Julie Taymor Mozart Magic Flute production I saw some years ago where the visuals dominated over the music. The one visually interesting scene this night was the graveyard where cloaked ghosts were stationed in each window of the three story set. The story of Don Giovanni is that of a womanizing cad (understatement). Much drama by the women he woos and continually betrays and they keep coming back for more. The male performers were swaggering and avenging. Don G is an arrogant ass-hole who ends up in hell. How’s that for a succinct synopsis. The characters were well portrayed, my favorite singers were Leporello, the Don’s servant, and Donna Anna, whose father was killed by DG. Their voices were strong and pure to my ears. New York Times review: http://nyti.ms/vuIqtU 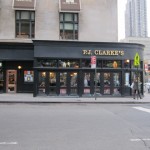 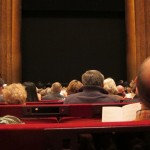 Amazingly good seats – short people in front of me (well, there’s that one guy)