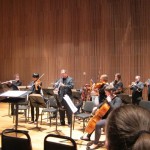 It was a special night. As a San Diegan and UCSD Music graduate, I was thrilled to learn that UCSD Music Department's Anna Thorvaldsdottir and Philippe Manoury compositions were being performed. Anna just received her Doctorate and Philippe is a composition professor. As the audience entered, EMP musicians were spaced around the room playing “Collective Improvisation 1 for Chamber Orchestra and 4 Laptops.” It was created by Nicholas Nelson and Amir Shpilman with bits from this evenings compositions to pay tribute to the composers Manoury, Jason Eckardt and Thorvaldsdottir. A nice way to welcome the audience to this lovely venue. The opening piece was “Trespass for Solo Piano and Chamber Ensemble” (2006) by Jason Eckardt. I enjoyed the quiet piano solo section a lot. The NY Premiere of Anna Thorvaldsdottir’s “Hrim” (2011) was next. I have listened to this gorgeous piece many times on “Rhizoma,” her debut album (2011) with music performed by the Caput Ensemble, the Iceland Symphony Orchestra, and Justin DeHart (UCSD pianist). First, let me say, that so far everything I know about Iceland is wonderful (see Oct. 1-11 on my blog), and this includes the musicians. The “Hrim” liner notes say, “The Icelandic title refers to the gradual growth of crystals, a notion paralleled in the piece not only by the frosty shimmer of individual sounds, but also in the ways these sounds cling together as clusters of activity outlining moments of greater structural importance and as threads of memory echoing throughout the work’s duration.” I couldn’t have said it better myself! Beautiful shimmering is exactly what it did and who doesn’t love that especially when includes drama enhanced by oboe and strings. A fashion aside: Anna wore a stylish red and black dress which reminded me of the big hall at Harpa Music Center in Iceland which is red and black symbolizing volcanos. www.annathorvalds.com. I have long been an admirer of Philippe Manoury but have heard only two of his compositions performed live, “En Echo” for voice and live electronics and “Partita 1” for viola and live electronics. This night was the US Premiere of a larger ensemble piece, “Instants Pluriels” (2008). There were two ensembles facing away from each other, each with a conductor, Mahir Cetiz and Nicholas DeMaison. Seven musicians in one and eight in the other with little duplicate instrumentation; there was a violin and percussion in each ensemble, the rest consisted of different instruments. The music each ensemble played was different but deliciously synced up at various points; the music was intricate without chaos. Another mesmerizing piece by Monsieur Manoury. He was in Paris and sorry not to be able to attend. This was a favorite evening of music. Anna, her husband, Hrafn Ásgeirsson, and I met the next day for lunch and talked about music, philosophy (his forte), and wonderful Iceland. 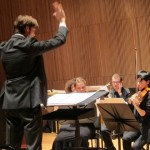 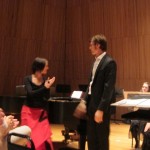 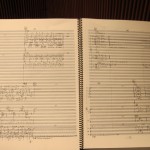 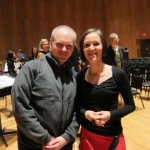 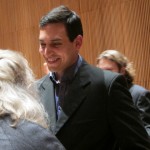 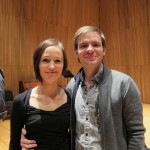 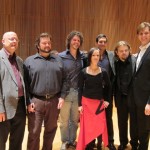 Composers and conductors and others