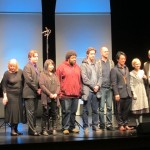 All the composers for this year's Other Minds

The panel discussion was with tonight’s composers Harold Budd, Gloria Coates, Ikue Mori and Tyshawn Sorey. I was particularly fascinated by Harold Budd as I have heard of him for years. He played with Albert Ayler 50 years ago and had good stories from the past. He grew up in LA, taught at Cal Arts and then found his niche after being asked by Brian Eno to work with him. Budd said he revolted from the avant-garde and has maintained that stance ever since. Gloria Coates, who I didn’t know of, has lived in Munich for decades. She has written 16 symphonies, more that any other woman. Ikue Mori discussed some of her laptop strategies and Tyshawn stressed his goal to obliterate the line (or dichotomy) between improvisation and composition. He’s getting his Ph.D at Columbia and working with George Lewis there. Smart move.

The concert opened with “String Quartet No. 5” (1988) by Gloria Coates, performed by Del Sol String Quartet. This was an American premier. There were three movements and by the third movement I had adapted to the microtonality and the canon structure. The first violin and the viola and tuned a 1/4 tone higher than the second violin and cello. In her notes even she says this form gives “the entire canon an eerie, generally settled atmosphere despite the simplicity of its slow melodies.” The third movement consists entirely in glissandos moving in different tempos and I found it lovely.

Second was Harold Budd, piano and Keith Lowe on bass and electronics (with bare feet). This music was, what I guess I would call, ambient. I am usually not a big fan of that genre unless I am having a massage but I enjoyed this. The bass player played a lot of arco but it was his pizzicato playing that I especially liked. Each note was gorgeous (sorta like Charlie Haden) and he and Budd seemed to connect beautifully.

A big shift in gears after intermission: Ikue Mori, electronics, also featuring Ken Ueno, voice, and Tyshawn Sorey, percussion. Ikue began the set performing solo laptop. (She uses MaxMSP, created by UCSD Professor/friend, Miller Puckette.) Pamela Z said she felt refreshed when she heard Ikue’s music. That’s perfect; me too. Ken joined Ikue with his multiplicity of vocal techniques such as Tuvan throat singing, growls, groans, yells and not so many quieter sounds. Tyshawn entered the stage with a huge boom on the large Concert Bass Drum and added amazing textures and percussive sounds henceforth. I was mesmerized by this set and was startled when quite a few couples left before it was over. Silly them.

All the composers for this year’s Other Minds 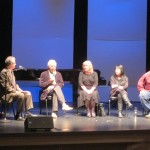 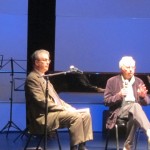 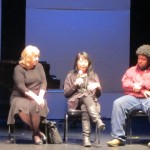 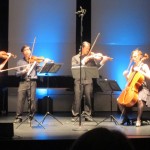 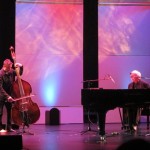 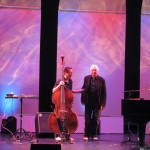 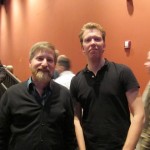 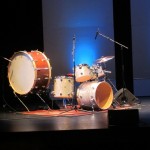 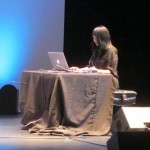 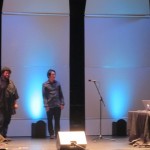 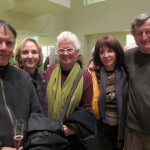 Friends from the Other Minds trip to Iceland Oct. 2011 – David, Linda, Me, Diane and Sebastiano