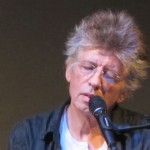 David Shively began the night with a NY premiere of “Plain Moving Landfill” by Thomas Meadowcroft.  This was solo percussion (and some electronics) as David does so well.  He used rubber hoses pumped like and sounding a bit like a pump organ, small gongs as well as some bass drum.  How to describe is not possible for me but I loved it.  The second piece was just as fascinating: “Striking, for strings and chopsticks” by Andrew Byrne, performed by the string quartet of Alex Waterman, cello; Esther Noh and Pala Garcia, violins; Erin Wight, viola.  This was aptly named as nary a bow was used, just chopsticks and fingers plucking the strings, hands tapping the wooden portion of the instruments.  Cool.  The final piece was “Public Works” (world premiere) by Chris Mann, poet performed by him reading text, with three musicians playing instruments that they don’t usually play (see above): David Shively on piano (he said later this was the first time in about 32 years he played -- not since a school recital); Alex Waterman playing Esther’s violin and Esther Noh on Alex’s cello.  I think they said they were playing Beethoven but I sure couldn’t tell.  It was really pretty dreadful as it was supposed to be.  Chris’s reading of the text was lively, animated, and very expressive and I couldn’t understand a word -- well, maybe a couple -- also the way it was supposed to be heard.  Now I do want to read his poem/text.

This is a group of performers founded in 2004 who met at Cal Arts when they were studying there.  All the pieces performed this night were from “New York Girls.”  The pieces as they say in the notes are performed overlapping/simultaneously/consecutively and more telling for me, “We value accumulation above cohesion” and I would say coherence. The photos may give you some idea of what went on.  They moved objects around the floor, loud percussion and guitar music interspersed throughout.  One guy laid on the floor repeating the opposite of what was said on a recording, a man wearing a lampshade on his head while others read something or other.  Two of the manly men wore T-shirts, skirts, mesh stocking and running shoes. I had no idea what was going on but so what; it was interesting and good for them for being so creative. 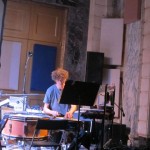 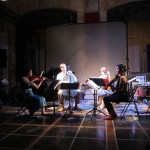 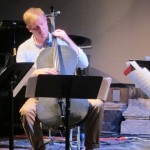 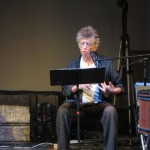 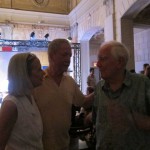 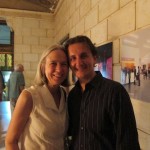 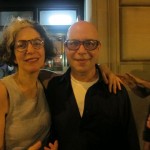 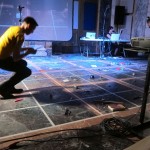 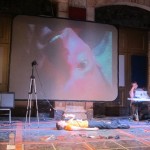 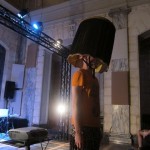 Lampshade head – why not? 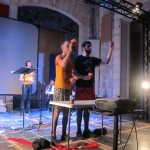 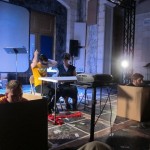