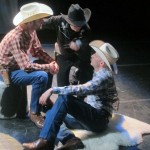 I am so glad I was there.  It was beautifully produced, very funny, irreverent and smart. The actors moved around the stage mainly in line dance steps which was great (and unusual).  Their hand and arm gestures accompanying their words were highly stylized. Another creative performance with Corey Dargel. I am always happily surprised by what he does.  I don’t usually do this but below you will see the write-up that was on Facebook about this performance.  It explains it so much better than I can.

"Brokeback Mountain" meets "Naked Lunch." GIT ALONG LIL DOGGIES is a meditative, cowboy dance-drama about the spiritual imprint of the windswept landscape of the American west. In an impressionistic narrative drawn from a variety of sources, two outlaws on the trail of an old adversary take work as jewel thieves for a washed up brothel madam. In a chance encounter with a traveling magician, they locate their enemy and conjure the violent forces of nature through sex-magic to take revenge.  GIT ALONG LIL DOGGIES commingles elements of William S. Burroughs’ novel "The Place of Dead Roads" with short stories by Annie Proulx, country-western line dance, and gay pornography. The performance unfolds against a projected video landscape of repainted Marlboro cigarette TV commercials and within an immersive soundscape incorporating country-western recordings from the 1920’s–30’s and contemporary new age music for pedal steel guitar. Directed by Yvan Greenberg, layering of choreography, text, sound, indeterminacy, and imitation, provides a continuously shifting framework for a reconsideration of the outlaw, frontier spirit that continues to shape the mindsets of Americans in the 21st Century. 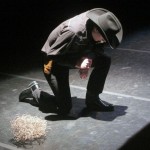 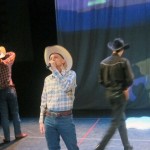 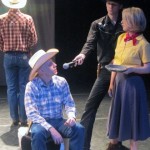 The cowboys and Sammy Tunis as Salt Chunk Mary 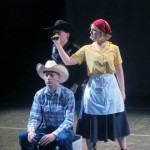 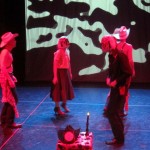 Off with their shirts and on with the masks