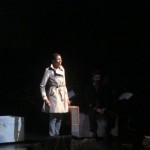 Schimmel Center for the Arts@

First let me say that this was really well-produced and staged.  All went incredibly well; not easy with a large choir and the band on stage along with the four singer/actors and a youth choir who joined the troupes near the end.  The film which was projected on a large horizontal screen at the back of the stage was quite remarkable - beautiful and pertinent to what was going on.  The vocalists were Helga Davis (a long time favorite of mine since I heard her sing in Craig Harris’s “TriHarlenium” some years ago), Christopher Burchett, Nancy Allen Lundy, and Claudio Prima.  All great.  My problem was I could never figure out what was going on and thought the text was confusing.  I got the Libretto after the concert and will read it soon to see if I can figure it out. It was the first time I had been to this venue which was nice - 650 comfortable raked seats. There are more River to River events taking place there and I plan to be at some.   NYTimes review: http://www.nytimes.com/2012/06/27/arts/music/oceanic-verses-at-pace-in-river-to-river-festival.html?ref=music 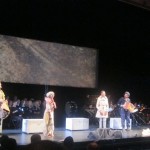 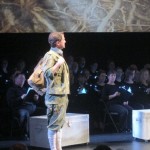 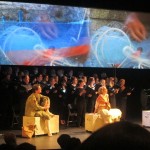 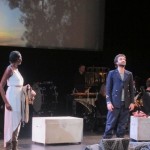 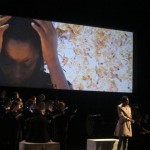 Helga Davis and her on the great video