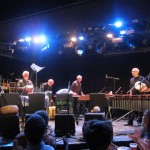 So Percussion’s Night of Awesome(ness)

A full house at LPR for this concert which presented six different percussion ensembles. Each of the ensembles were very different and all fascinating. Akros Percussion Ensemble performed “Ordinary Music Vol. 13.” Mobiius Percussion Quartet played “Paper Melodies (my music box music).  The instrumentation included hammer dulcimer, toy piano, melodica, cricket clickers and machine-like toys.  MP Duo consisting of Todd Meehan and Doug Perkins performed two pieces one of which was “Binary” composed by Matt McBane (San Diegan and founder of the Carlsbad Music Festival). This was the NY premiere.  Matt says the title comes from the idea of polarity: two parts interlock with rhythms that fill all the spaces in a measure but never play at the same time.  Great.  Nexus, a great quartet of percussionists who apparently are the grand early group who mentored many of the young percussionists. I had not heard of them but was mightily impressed by their performance of five pieces especially the last one which was a collection of great Ragtime Xylophone Music composed by George Hamilton Green (1893-1970).  Mantra Percussion consisting of nine performers played an excerpt from a wonderful piece, “Science is Only a Sometimes Friend” on glockenspiels along with an electric organ. Tigue played a piece composed by Tristan Perich, great young composer.  I have seen quite a few of his works now and find them wonderful and creative. This one has the hard name “qsqsqsqsqqqqqqqq” named after an except of commands he types when configuring his drawing machine.  This piece is for toy piano and electronic parts. He says, “There, where perfection turns imperfect and the imperfect gains perfection, is where our logic ends and the other begins.”  Got that?  To end this night of great and varied percussion, all the percussionists gathered on stage to perform Terry Riley’s landmark “In C.” I’ve come to believe that percussion is the way in to “new music” for many.  It has discernible rhythms and that helps get over the hurdle of how to listen to unfamiliar. 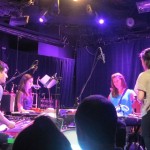 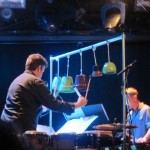 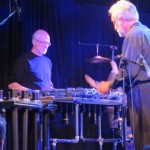 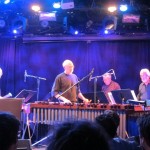 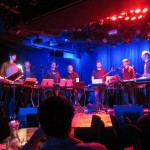 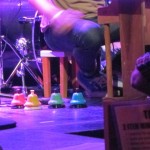 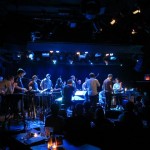